Why do bondsmen have great “leeway?”

In the article and video below, the author, Theodore Decker, failed to make one important point that would help people realize why “Agents are given great leeway in tracking and arresting defendants for whom they post bond…”

See my comments below in [bold]…

Police have identified the two Columbus bail bondsmen who snatched a bail jumper from an East Side dry-cleaning business on Monday morning, firing a gun into the store’s ceiling and terrifying customers. 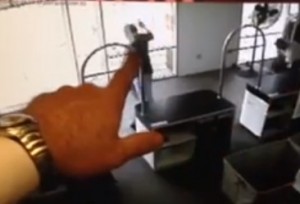 Police first publicized the incident on Monday afternoon, a few hours after it occurred. Detectives said at the time that they weren’t sure whether the store’s video-surveillance cameras had captured a kidnapping or something else entirely.

In the video, the two bondsmen are seen getting in line behind the man they are after. One rushes forward with a gun in hand and grapples with the absconder while the other guards the door. He shoots into the ceiling when a friend of the suspect runs toward them from the parking lot.

The first bondsman then handcuffs the man they want and takes a gun off him, handing the weapon to his partner.

An employee at the cleaning business who ran out the back door told police in her call to 911 that she wasn’t sure what was going on, but that one of the men had screamed, “You’re under arrest, man! You’re under arrest!”

Such high-profile confrontations between bondsmen — technically known as bail-bond agents — and their clients are not unheard of.

In 2012, a local bondsman shot and wounded a Valleyview man during an apprehension. Those who post bond to cover a defendant’s bail are responsible for making sure the person shows up for all court dates. If the defendant doesn’t, the bond agent must cover the full amount of bail.

[Covering the ‘full amount of the bail’ is the last thing the court, the public, or the bail bondsman wants to happen.  The first thing that is the bail bondsman’s job is to recover the ‘skip’ and turn them back in to the authorities. Frequently the ‘skip’ resists.  So indeed, their frequently can be confrontation.]

The bond agent in the Valleyview case wasn’t indicted. Agents are given great leeway in tracking and arresting defendants for whom they post bond and are protected by statutes and court decisions dating back more than 100 years.

Unlike law-enforcement officers, bond agents can snatch skips without a warrant. Also unlike police, bail-bond agents don’t need to seek extradition if someone crosses state lines.

[The reason for the above, as upheld by multiple Supreme Court Cases, is that the defendant or ‘skip’ has already granted contractual permission to the bail bondsman to recovery him/her if he/she fails to meet any of the condition of the bond including appearing for all court dates and continuances.]

Fox, a former police officer and an officer of the Ohio Bail Agents Association, acknowledged the liberties afforded to bond agents but said, “I don’t think it gives you leeway to be shooting bullets into any ceiling.”